By providing improved road network connections, the Western Sydney Infrastructure Plan will transform the region’s economy and make Western Sydney an even better place to live and do business now and in the future.

Check out our video portal to find out more about the road project that are transforming Western Sydney.

The Australian and NSW governments have released the latest Report Card for the Western Sydney Infrastructure Plan, providing a comprehensive overview on the progress of the package.

Western Sydney is Australia’s third largest economy. During the next 20 years the region is expected to grow from two million to three million people, which is why the Australian and NSW governments are investing money into significant road infrastructure.

By 2031, greater western Sydney will be home to over half of Sydney's population. Roads and Maritime Services is delivering significant upgrades and expansions of major roads that are needed to accommodate this growth through the WSIP plan. The Plan provides improved road transport capacity ahead of future traffic demand, as planned residential and employment development comes online in western Sydney growth areas and the Western Sydney Employment Area. This work will transform the region’s economy and make western Sydney an even better place to live and do business.

Roads and Maritime Services is committed to making NSW a better place to live, work and play by enabling people and goods to move safely, efficiently, and reliably throughout NSW. The WSIP plan is part of this commitment.

To deliver the benefits of the Western Sydney Infrastructure Plan to our customers earlier and to minimise impacts on the community during construction, projects are staged. More details are provided on specific project pages.

The Werrington Arterial Road, which opened to traffic in May 2017, was the first major project to be completed as part of the Western Sydney Infrastructure Plan. The upgrade provided road users with better, safer access between the M4 Motorway and the Great Western Highway.

The Northern Road upgrade will see around 35 kilometres of road upgraded between The Old Northern Road at Narellan and Jamison Road at South Penrith. The overall upgrade is being delivered in six sections with Stage 1 between Narellan and Peter Brock Drive, Oran Park opened to traffic April 2018.

Upgrading The Northern Road in stages to a minimum of four lanes between The Old Northern Road, Narellan and Jamison Road, South Penrith, including an interchange (underpass) at Bringelly Road. Construction on the first section of The Northern Road started in 2016.

The new M12 Motorway will provide direct access to the Western Sydney Airport at Badgerys Creek and connect to Sydney’s motorway network.

The Glenbrook Intersection upgrade was opened to traffic in October 2018, improving safety and access at the intersection of Ross Street and the Great Western Highway, Glenbrook.

We respect the community and the environment by minimising the impact of our road and waterway infrastructure. Roads and Maritime seek to minimise and avoid impacts on biodiversity from road and other infrastructure projects. When building roads, sometimes land available for wildlife (biodiversity) is lost and needs to be compensated for. When impacts cannot be avoided, Roads and Maritime compensate for biodiversity by ‘offsetting’ in a different place.

In early 2018, we ran an Expression of Interest for landowners in Western Sydney that were interested in entering a Biodiversity Stewardship Agreement on their land. Through the Biodiversity Offsets Program, we now have 550 landowners with signed contracts for 1.1 million hectares which has bought almost $35 million in biodiversity credits. 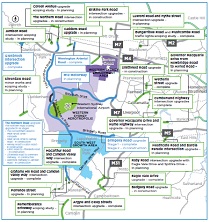 For further information about this project: