The Australian and NSW Governments are investing in a new bridge over the Macquarie River in Dubbo as part of their commitment to Building a better Dubbo. Once complete, the new bridge will ease congestion and maintain reliable access through Dubbo during flood events.

Geotechnical and survey field investigations have commenced. The information gathered, in addition to community feedback will inform the detailed design process.

The project team will continue to work with landowners, the Aboriginal community, Dubbo Regional Council and other key stakeholders throughout the detailed design phase to identify opportunities for project refinement.

The project team has been meeting with residents, landowners and businesses to keep them informed about how the project is developing. We've been discussing impacts and answering specific questions raised by stakeholders.

The project has now been handed over to the delivery team who will continue work on the project. This includes commencing the detailed design and associated works, such as further geotechnical and survey investigations, as well as detailed planning and finalising design.

The concept design and Review of Environmental Factors (REF) were on display for public comment from Monday 27 May 2019 to Friday 28 June 2019. During this time, Transport for NSW received a total of 310 submissions relating to the New Dubbo Bridge. All submissions made during the display period have been addressed and responded to in a submissions report (PDF, 11Mb).

The New Dubbo Bridge Submissions Report relates to the REF prepared for the New Dubbo Bridge and summarises the issues raised as well as responses to each issue raised by the community, stakeholders and government agencies. The report details further environmental investigations carried out since the finalisation of the REF as a result of changes to the proposal and identifies new or revised environmental management measures for the project.

Transport for NSW has also finalised the 2016/2017 New Dubbo Bridge Consultation Report which summarises consultation with the community and key stakeholders on the new Dubbo Bridge during the display of the six strategic options prior to the announcement of River Street as the preferred route. The report is available here to view or download (PDF, 2.33Mb).

The New Dubbo Bridge provides another river crossing in Dubbo during flood events and will maintain reliability for commuter and heavy freight traffic through Dubbo during these events.

Following investigation of six strategic options and community consultation, River Street was announced as the preferred route for the new bridge in May 2017.

The preferred option has been chosen to improve freight efficiency on the Newell Highway, reduce traffic congestion and provide an additional route during flood events. It will assist in easing congestion in Dubbo when needed most.

The new 545 metre bridge will connect the western shore of the Macquarie River to River Street, travelling over the flood plain west of the river. The New Dubbo Bridge project will also include:

What is happening now?

The project is currently in the detailed design stage. During this stage the concept design features are further developed and detailed to enable a final set of drawings to be completed in preparation for construction.

Transport for NSW will continue to consult with the community during each phase of the project.

The project will provide significant employment opportunities as well as local and regional benefits to the Central West when major work is set to start to commence in 2022.

All submissions from the community and stakeholders were reviewed, considered and responded to in the New Dubbo Bridge Submissions Report. In response to submissions and following further design development since the display of the REF, changes to the concept design have been made.

The changes are listed below:

The determination allows Transport for NSW to continue the planning for the River Street Bridge project, including starting the detailed design. Transport for NSW will continue to consult with the community and stakeholders before and during the construction phase, which is expected to start in 2022.

The Review of Environmental Factors (REF) assesses the potential social and environmental impacts of the project and identifies ways to minimise these impacts. View or download a copy of of the REF main report. The full report is on the project documents page. 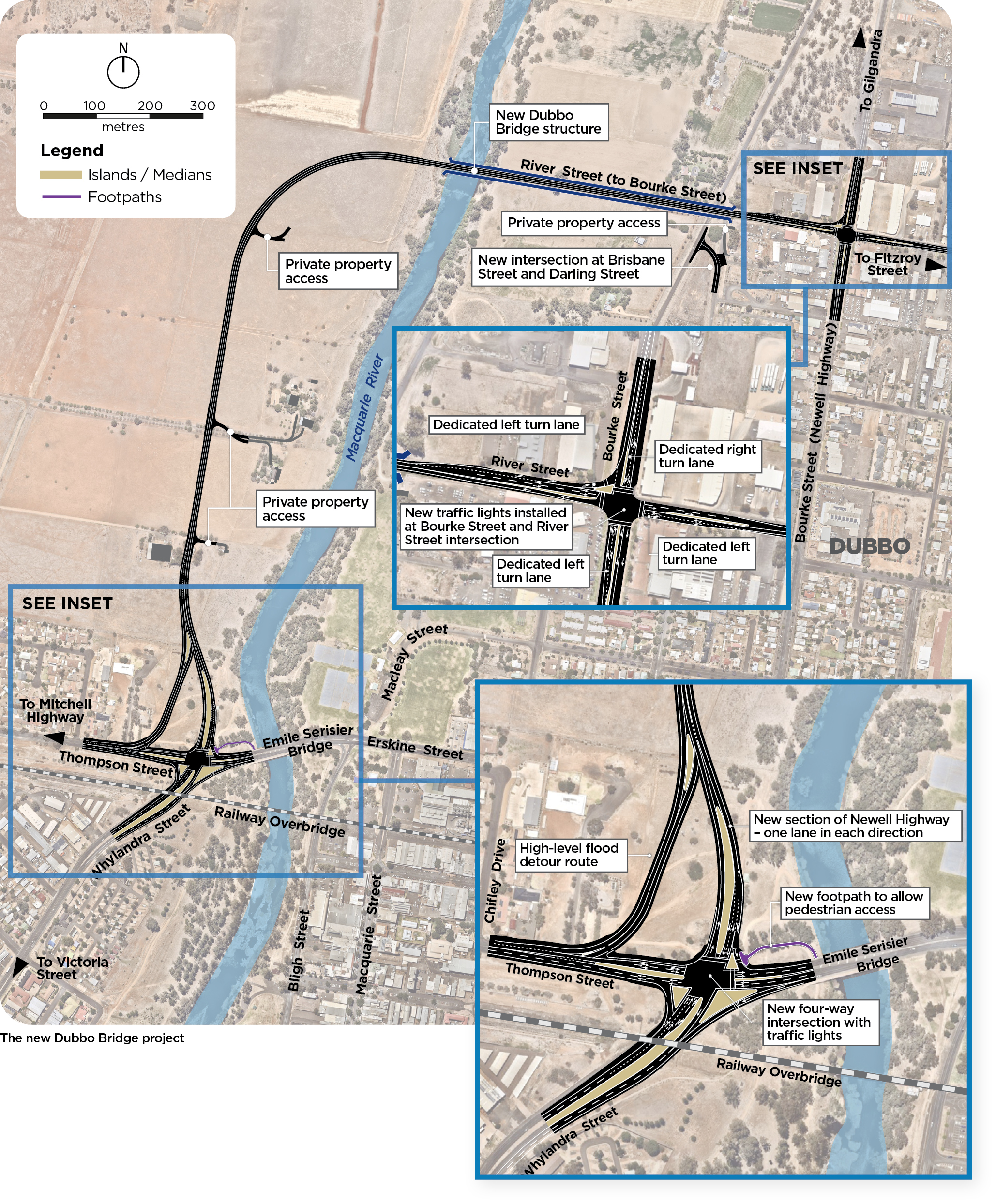