The NSW Government is planning a future upgrade of The Horsley Drive between the M7 Motorway and Cowpasture Road, Horsley Park to a four lane divided road. The upgrade would include the option for six lanes in the future to meet western Sydney’s transport needs and support expected industrial and employment growth. 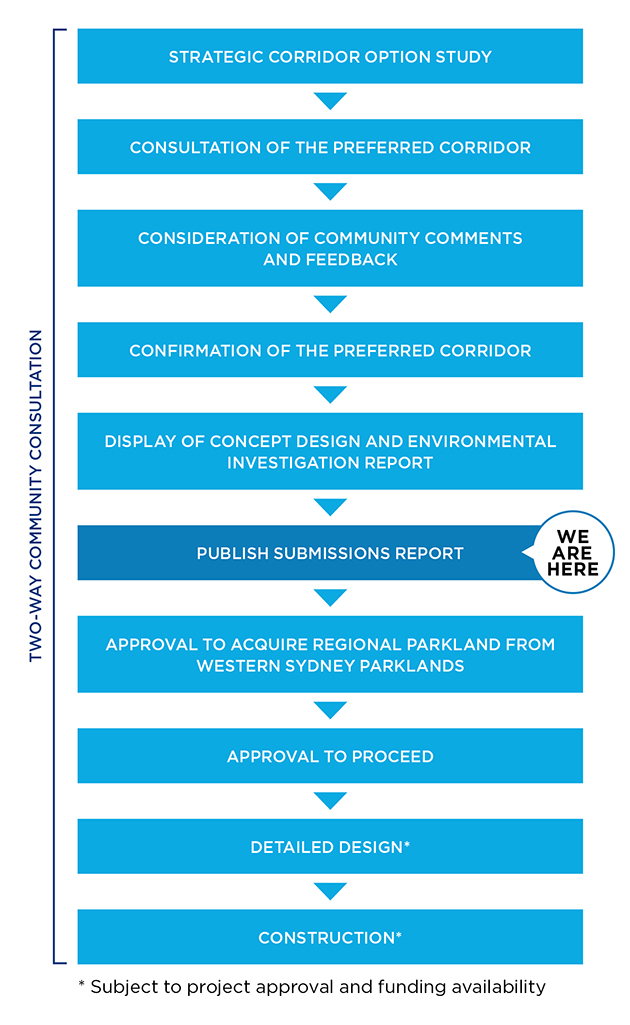 Next steps for project:

What is happening now?

Between June and August 2017, Roads and Maritime Services invited comments from the community and other stakeholders on the Environmental Investigation Report (EIR) and concept design for The Horsley Drive upgrade.

A total of 33 submissions were received from government agencies, utility authorities and community members.

The main matters raised included traffic and access, socio economic impacts, noise, non-Aboriginal heritage issues and utilities. We have summarised the feedback received, and provided responses in a Submissions Report.

The submissions were reviewed to assist in determining approval for the proposal. After considering all feedback and responses, along with the aim and design requirements for the project, we have decided to proceed with The Horsley Drive upgrade. There have been no changes to the proposal resulting from the submissions that are of a nature deemed so great as to result in a fundamentally different project to that displayed in the EIR.

The proposed upgrade requires Roads and Maritime to acquire a strip of land within the Western Sydney Parklands (identified as a regional park under the National Parks and Wildlife Act 1974).

Before beginning any land acquisition, the land would need to be removed from the gazetted regional park area. Roads and Maritime is in discussion with NSW National Parks and Wildlife Services (NPWS) to carry out this process. The impact to regional parklands would be offset by providing compensatory land in agreement with NPWS.

Following the land acquisition within the regional park, planning approval and funding availability, Roads and Maritime would proceed to final design and issue tenders for construction.

We will continue to engage with the community and other stakeholders as the proposal progresses.

The project would also deliver improved access to the Western Sydney Parklands and provide a separate off-road shared path for cyclists and pedestrians.

Planning for an upgrade of The Horsley Drive was announced in March 2015. Roads and Maritime carried out an options assessment to identify the preferred corridor for the road upgrade. The option development process involved technical and specialist input including traffic modelling, strategic design and consultation with key stakeholders including Fairfield City Council, WaterNSW and the Western Sydney Parklands Trust.

Roads and Maritime invited community feedback on the proposed preferred corridor in August and September 2015. After reviewing the submissions and considering feedback, the preferred corridor was announced in July 2016 and planning was continued to develop a concept design. The concept design and Environmental Investigations Report were on display between June and August 2017 for comment.