Safety improvements on the Mitchell Highway from Bathurst to Orange are progressing with emergency and incremental improvements at Summer Hill Lane, Shadforth, Cashens Lane and Houses Lane.

Works are also advancing at Guyong, Guyong East, Vittoria and Vittoria East under the NSW Government’s $50 million Safer Roads Program. The road from Bathurst to Orange sees around 10,000 traffic movements a day and has a history of road crashes. In order to reduce road trauma, proven life-saving solutions are being installed at various locations. 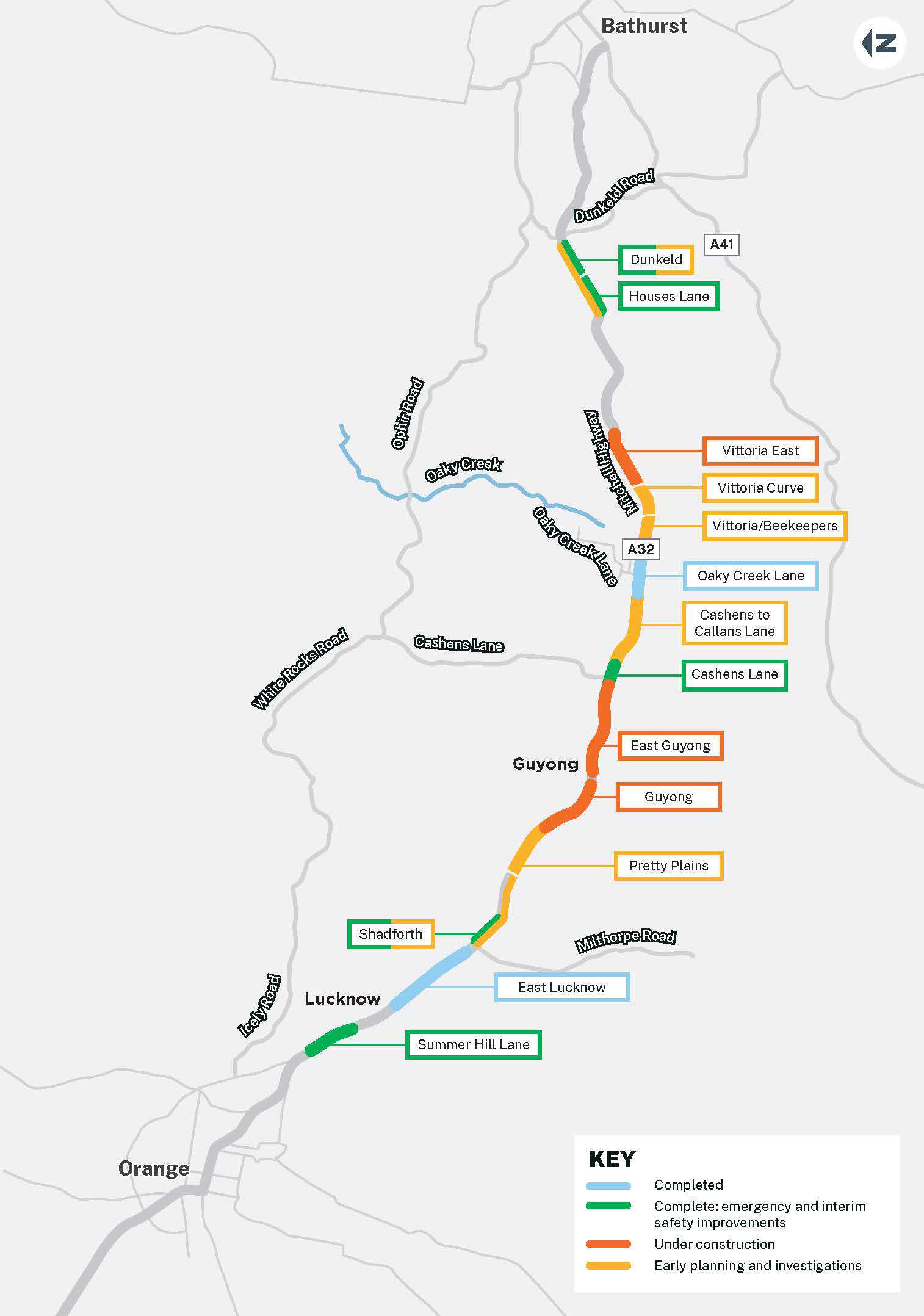 Transport for NSW is delivering safety improvements for the Mitchell Highway, between Bathurst and Orange. Along with the NSW Government investing $50 million to improve safety for road users and reduce the risk of crashes along the 50 kilometre section of the highway, a number of emergency repairs have also taken place to improve the safety of all road users.

We are seeking feedback on your experiences travelling the Mitchell Highway between Bathurst and Orange, and how this experience might be improved in the future.

This feedback, along with feedback received during consultation previously carried out by Transport for NSW, will be used to give us a better understanding of customer needs to inform further improvements.

Following severe weather at the end of 2021, major repair works were carried out between Bathurst and Orange. Extensive patching and pothole work was carried out along the Mitchell Highway along with safety upgrade work, including sealing road shoulders and widening centre lines

Emergency and incremental improvements include:

Summer Hill Lane: Motorists are enjoying a 1km length of widen road with improved road shoulders and a wider centre line to increase space between oncoming traffic. Wide centre lines are estimated to reduce head-on crashes by 50 per cent.

Shadforth: 1.7 kilometres of the road has been upgraded with an enhanced centre line and smoother road surface completed as part of these works.

Cashens Lane Intersection: A new road surface has been installed across 500 metres of this intersection.

Houses Lane: A new wide centre line has been created and road shoulders widened along 1km of the highway.

Road safety improvements are advanced with the construction of a westbound overtaking lane at Guyong, widening of the road at Vittoria East, and road surface improvements and culvert works at East Guyong.

The aim of these safety improvements is to increase the separation of oncoming vehicles, alert drivers when they leave a lane, and provide a more forgiving road environment for when people make mistakes

Works will also include road widening, intersection upgrades, vegetation removal and drainage improvements throughout the project.

In the coming weeks you may see our project team carrying out field investigation work and consulting with impacted residents. This will help us investigate future improvements in the study area.

We will keep the community updated as the project progresses.