Transport for NSW is working with Crown Lands to acknowledge the historical significance of the Prince Alfred Bridge (timber road viaduct).

Due to safety concerns, the NSW Government is planning to remove the non-operational section of Prince Alfred Bridge (timber road viaduct) in November 2021. The project team will be seeking guidance from the community in October 2021 on a potential tribute to the bridge. 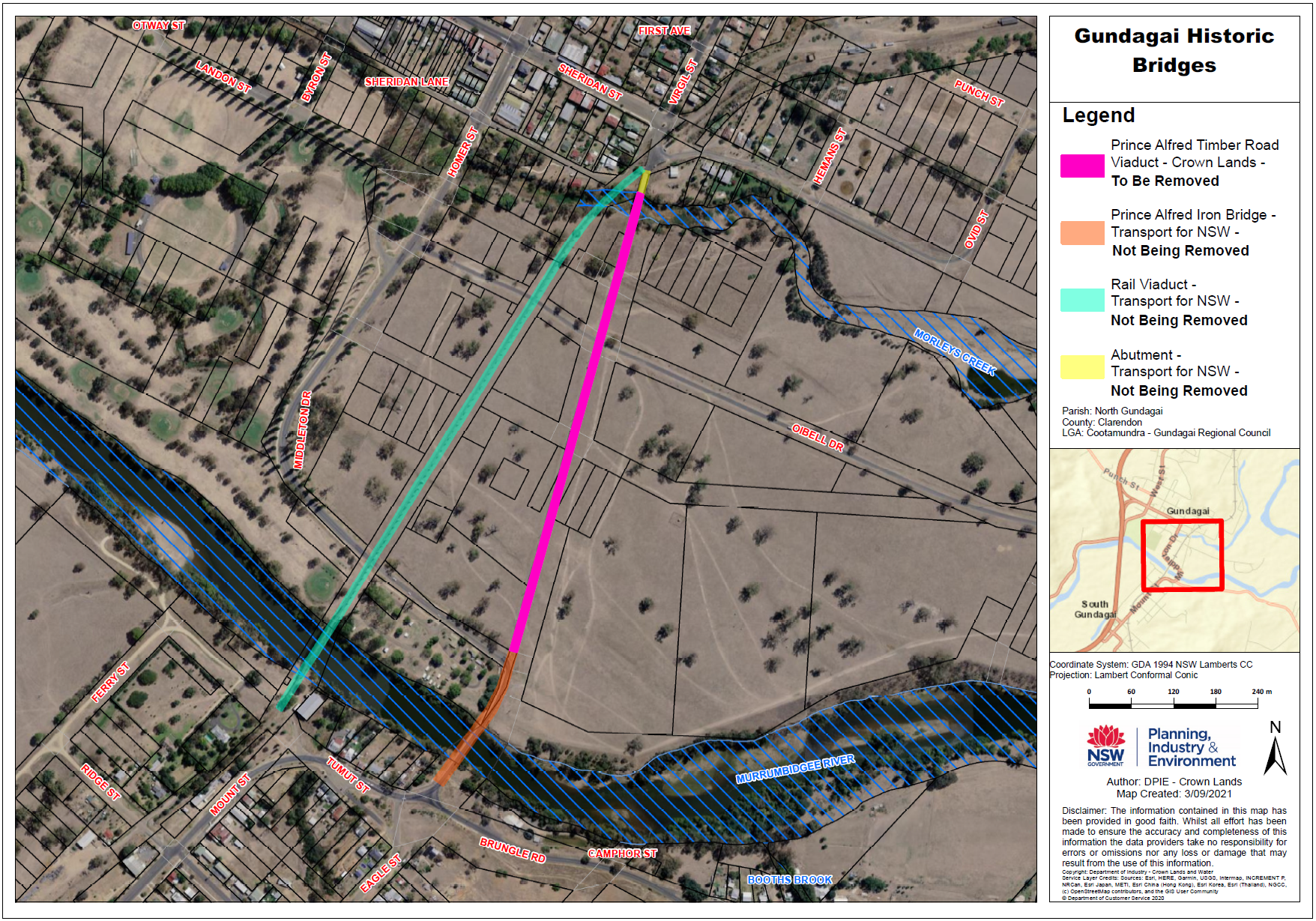 The Prince Alfred Bridge was built in 1867 and was the first major bridge crossing over the Murrumbidgee River. The southern end of the bridge remains in service today, while a 715-metre section to the north (timber road viaduct) has been closed to traffic since 1984. These spans were constructed in 1896, and have been a longstanding historical landmark at Gundagai, representing a bygone era and a glimpse into earlier engineering solutions.

Transport and Crown Lands are working together with Cootamundra-Gundagai Regional Council to deliver a whole-of-government approach to achieve the best outcome for the community.

The timber road viaduct (highlighted above in pink) will be removed as part of this project. The historic bridge has deteriorated extensively and is in very poor condition, creating a significant risk to public safety and the environment. The NSW Government is working quickly to progress this project while monitoring the water levels of the Murrumbidgee River, as a flood event in the area is expected to cause further damage to the bridge.

Removal of timber road viaduct across the flood plain

Status of the existing bridge

The existing timber road viaduct structure is in a dilapidated condition and beyond repair. The purpose of this project is to develop and deliver the viaduct management action plan in consultation with key stakeholders and the community of Gundagai. Due to the risk of collapse, timber spans over the local road, Ol Bell Drive, were removed in March 2021. This action was necessary to remove the risk to the public.

Safety is our priority

The Gundagai SES reported on 6 August 2021 that a section of the bridge had fallen at its southern end. Heavy rain in the area over winter increased the weight of bridge timber due to moisture retention, which is suspected to have caused this section to fail.

There is further risk of other sections of the bridge also failing, including the potential for significant collapse if there is a flood across the floodplain. Fencing has been erected in order to protect the community.

The Gundagai historic bridges project will:

Crown Lands has carried out work on the OI Bell Drive spans of the timber road viaduct, after routine engineering assessments identified deterioration due to recent heavy rainfall and vehicle impact.

Residents in the vicinity of the bridge have been advised about work.

Consultation with the community is an important part of this project’s development. The NSW Government will be seeking feedback in October 2021 to understand how Gundagai residents would like to commemorate the bridge. We understand one of the many benefits of this project is the opportunity to deliver a place for future generations to connect with and understand the historical significance of the bridge. The project team will reach out to local residents and businesses to seek guidance on future plans to celebrate Prince Alfred Bridge. 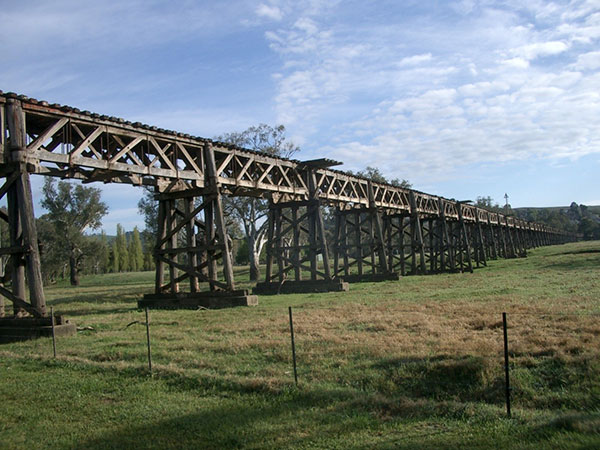 Built in 1902, the Gundagai Howe timber rail bridge sits next to the road bridge, and is an impressive 819.4 metres long. This bridge serviced the Tumut area for 82 years and is listed on the state heritage register. The non-operational Howe timber truss rail bridge is also an important issue for the local community and key stakeholders to discuss in the coming months. The road and rail bridges are important heritage features in the landscape and the lives of local residents. We will reach out to the community soon to discuss future plans for the rail viaduct.

We are currently in the early planning stage. The project team plan to start removing the timber road viaduct from November 2021. The NSW Government will reach out to the Gundagai community for guidance on how they would like to memorialise the bridge and its history. All of the suggestions that we receive will then be considered in future plans for the landmark location.

For further information on this project, please contact Crown Lands: