Roads and Maritime finished work on the intersection of Georges River Road, Portland Street and Lees Avenue at Croydon Park. Thank you for your patience during this important work. You can read more about our work in our August 2019 community update (PDF, 425Kb). 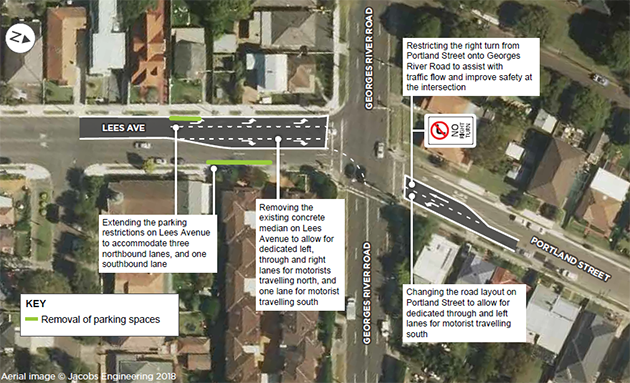 Map of the works. A larger version of this map is available in the March 2019 community update.

What is a 'pinch point'?

Pinch points are traffic congestion points, intersections or short lengths of road at which a traffic bottleneck exists slowing down the broader network. They cause a build up of traffic and travel delays at these spots and on the wider road network.

The NSW Government funded this project as part of its $300 million Urban Roads Pinch Point Program, which aims to reduce congestion and improve travel time on Sydney’s busiest corridors.

Heavy traffic on Georges River Road caused congestion and delays for road users. To improve traffic flow we will made changes to Portland Street and Lees Avenue.

To build the upgrades, we demolished the existing concrete median on Lees Avenue, removed and replaced the top layer of the road, installed new signs and painted new line markings for the improved intersection layout.

What has changed at the intersection?

Roads and Maritime asked the local community for feedback in June 2018. We received comments from 18 people and have responded to all community feedback in a consultation report (PDF, 1.04Mb). We thank everyone for considering the proposal and for the time they spent to give us feedback.

Thank you for your patience while we delivered this important work. Your support is important as we continue to deliver safer and more efficient journeys throughout NSW.

If you have any questions, please contact our delivery partner, Ventia Boral Amey Joint Venture: