Traffic congestion is increasing in Thirroul, particularly where local roads join Lawrence Hargrave Drive. This is due to turning vehicles, parking and intersection capacity.

To ensure the transport network continues to meet the needs of the growing population, we are proposing a preferred option and an alternate option to help ease congestion and create more reliable journeys through Thirroul while ensuring the look and feel of the township is maintained.

A preferred option and an alternative option are proposed for Thirroul.

Both options aim to improve travel times for individuals, public transport and freight and improve reliability across the transport network.

There would be impacts to parking under both options. We will ensure parking offsets are in place before the completion of the project

Changes to intersections and traffic management

A number of intersection and traffic changes would be implemented at key congestion points along Lawrence Hargrave Drive to create one continuous lane of travel.

The changes would allow transport users to travel continuously without being temporarily stopped behind cars turning right off Lawrence Hargrave Drive.

Changes are proposed at:

This option includes changes to existing on-street car parking and intersections to allow traffic to flow continuously through the town centre as well as the potential construction of a right turn lane at Station Street. 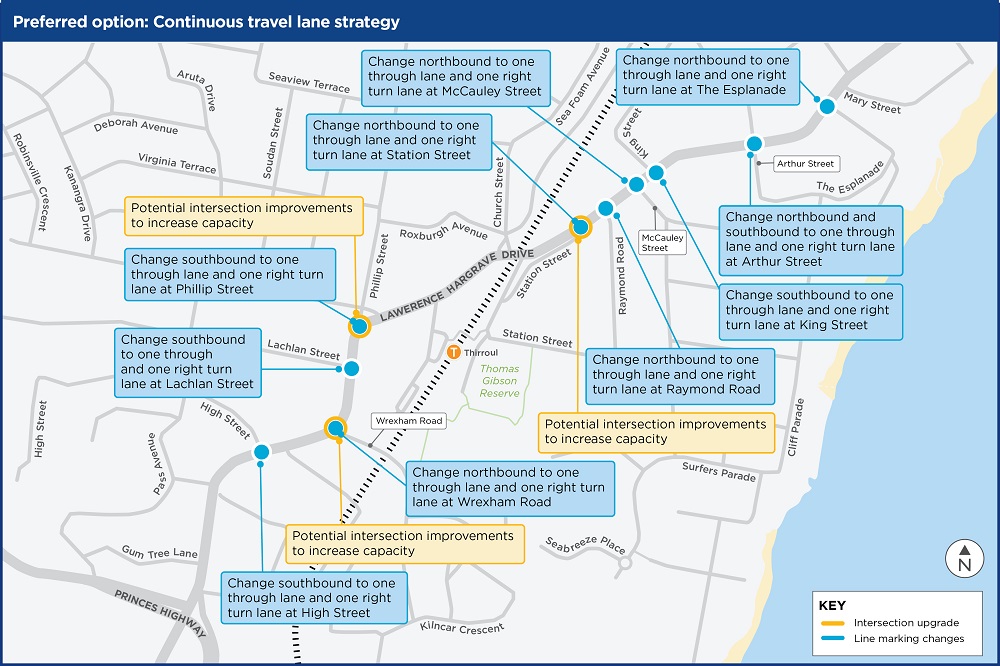 Parking impacts under the preferred option

About 65 parking spaces will be impacted under this option. This includes about 33 in the shopping precinct between Phillip Street and Arthur Street.

The locations of impacted parking spaces are shown in the table and on the map below. 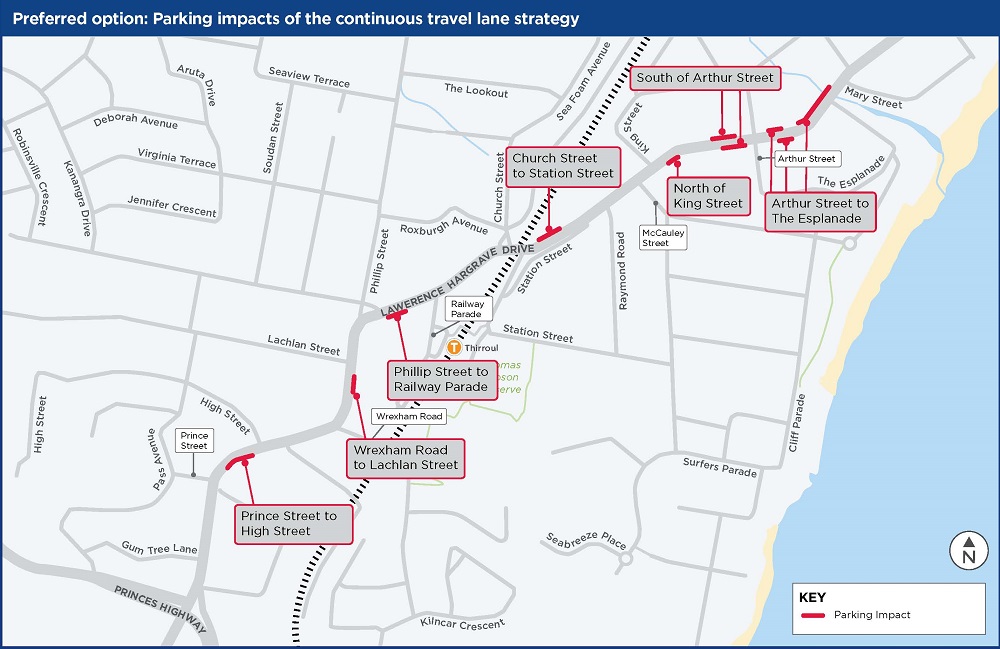 Clearways would be implemented on Lawrence Hargrave Drive southbound between Church Street and the Princes Highway during the morning peak, and northbound between Prince Street and Mary Street during the afternoon peak. This would provide two continuous travel lanes for traffic through Thirroul.

To allow the operation of two continuous travel lanes, changes to existing on-street parking and intersections along Lawrence Hargrave Drive would need to be made, including:

Clearways are not proposed on weekends. 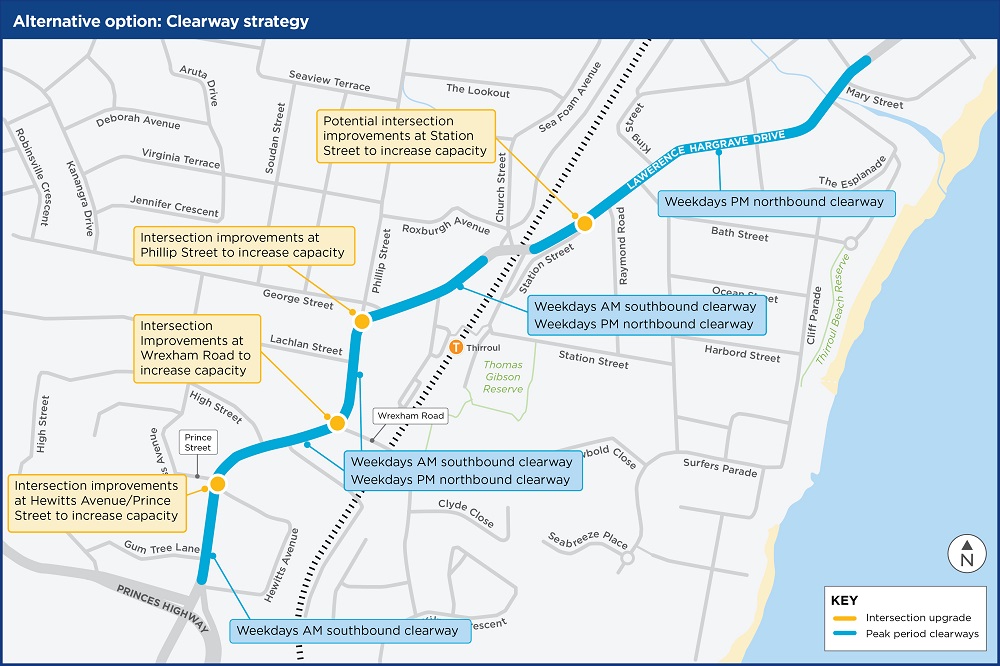 Parking impacts under the alternative option

The locations of impacted parking spaces are shown in the table and on the map below. 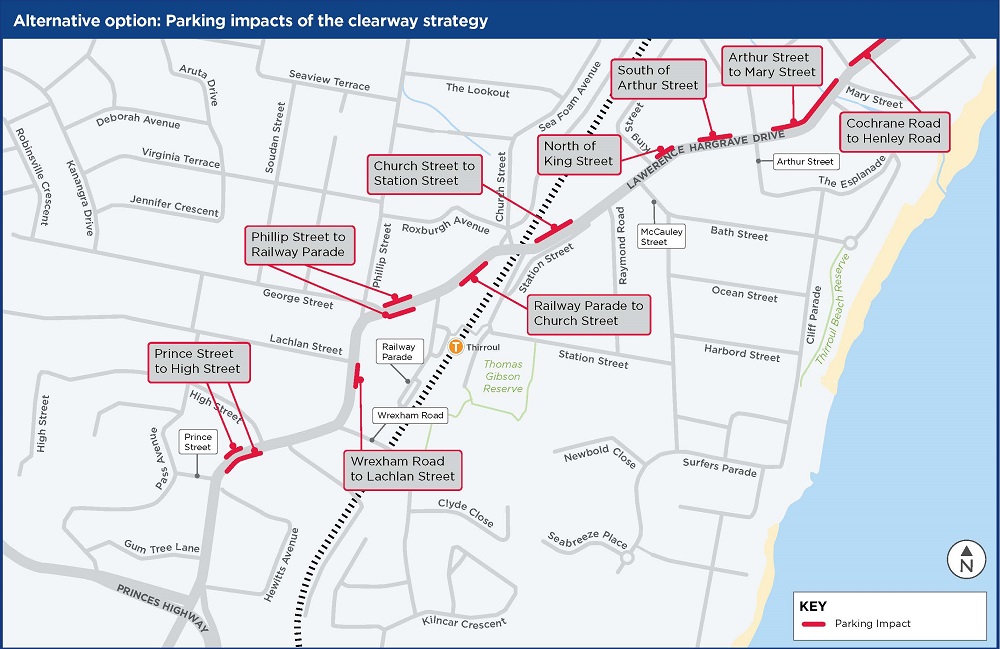