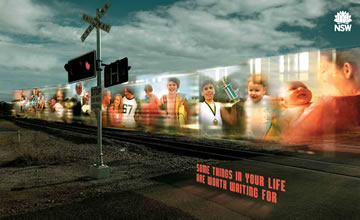 There are some 3,804 railway crossings in NSW, with almost half of these on public roads.

The facilities provided at railway crossings are assessed against over 70 risk factors including traffic and train volumes, speed, and visibility.

Trains travelling on the same line may travel at different speeds, and at up to 160km/h. They cannot stop quickly; some take over one kilometre to stop.

The consequences of a collision between a train and a vehicle or a pedestrian are high, and may lead to the death of the pedestrian or vehicle occupants.

Since 2002, Transport for NSW and the rail agencies (Country Rail Infrastructure Authority, RailCorp and the Australian Rail Track Corporation) have been conducting public education campaigns on an annual basis in a commitment to improve and promote railway crossing safety.

NSW Police have also assisted in promoting safety at railway crossings and provided enforcement of road rules at high-risk sites.

A national railway crossing campaign was developed by the National Level Crossing Council and is now being used in NSW. This campaign takes an emotional approach aimed at local country people who regularly use railway crossings. The campaign conveys why it is important for drivers when approaching a railway crossing to practice safe behaviours, obey road rules and realise that trains can run at anytime.