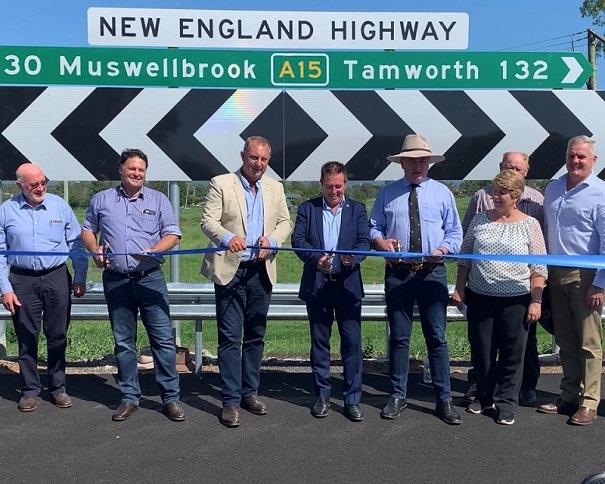 The new Scone bypass will soon open to traffic, delivering safer, faster journeys along the New England Highway and transforming the town centre.

Deputy Prime Minister and Federal Minister for Infrastructure, Transport and Regional Development Michael McCormack said the new bypass had been completed well ahead of schedule, with a community walk being held today to celebrate the achievement.

"This five-kilometre bypass will improve road safety and reduce travel times for freight and long-distance traffic, by providing an alternative route around the town," Mr McCormack said.

"The entire region will benefit immensely from the bypass opening, particularly the local economy with more than 1,150 direct and indirect jobs supported during construction.

"Today's community walk is a fitting way to mark the completion of the project, which follows many years of planning, consultation and construction."

NSW Minister for Regional Transport and Roads Paul Toole said the bypass would change the way people moved in and around Scone.

"We're giving local streets back to local communities, with the new bypass taking a large number of heavy vehicles from the town centre," Mr Toole said.

"Until now, highway traffic passed through Scone along the main road access to the town which is also the main street through the central business district.

"The New England Highway south of Scone carries 8400 vehicles a day, which means those looking to continue their journey without stopping will no longer need to travel through the town centre."

Federal Member for New England Barnaby Joyce said the community event was a welcome celebration for the local community.

"There is still some landscaping work to be completed, but with the bypass opening to traffic this week, today’s event gives the community a once-in-a-lifetime opportunity to walk along the bypass and take some unique photos of the town and surrounds," Mr Joyce said.

"As a memento for the day, community members have also been given a passport-style brochure to collect stamps as they cross the three bridges along the bypass route."

"It is all helping to create a corridor of commerce through the heart of the Upper Hunter and New England."

Member for Upper Hunter Michael Johnsen said the bypass was a major project and took almost two years to complete.

"The bypass was no easy undertaking, with crews working hard to build the two-lane highway bypass to the west of Scone, passing between White Park and the redeveloped Scone golf course and incorporating three bridges," Mr Johnsen said.

"By also providing a grade-separated intersection at the southern end, crossing over both the rail line and over Kingdon and Liverpool streets, it will allow unimpeded access to and from the bypass to the north and south of town and midway at St Aubins Street."

"This is another example of the Nationals in Government keeping their commitments and delivering for the Upper Hunter."

The $137 million Scone Bypass project is jointly funded by the Federal Liberal and Nationals Government ($65 million) and the NSW Government ($72 million).