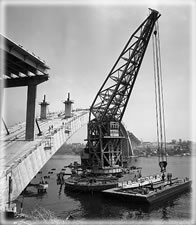 The Gladesville Bridge was opened on 2 October 1964. Along with Tarban Creek Bridge and Fig Tree Bridge, it was originally planned by the NSW Department of Main Roads (DMR) to form part of a north-western expressway serving the northern suburbs of Sydney. Whilst the expressway was never built, the Gladesville Bridge, at the time of construction the longest concrete arch bridge in the world, remains as an engineering feat and a testament to the commitment of all those involved.

The major output of this project was over 20 hours of recorded interviews with people who experienced or were involved with the construction of the Gladesville Bridge. Some were local residents or school children while others were employed on the project in varying capacities including engineering, surveying, filming, labouring, plant operation and worksite supervision.

The sound files in the table below feature some of the key themes uncovered during the course of the project, including the old Gladesville Bridge, the planning vision, bridge design, the construction process and the opening of the bridge.

The opinions expressed in the oral history interview tapes are those of the individuals concerned and do not necessarily represent in whole or in part the position of RMS.

Part 3 - Design, planning and structural analysis of the new bridge

Part 3 - Design, planning and structural analysis of the new bridge