Roads and Maritime is a relatively new organisation but it is only the most recent in a long line of agencies that have built roads and managed transport on land and water in NSW.

Our infrastructure assets such as lines of roads, bridges and wharves capture the story of two centuries of the state’s settlement and development. Roads and Maritime also makes a significant contribution to the identification and investigation of Aboriginal cultural heritage in NSW. 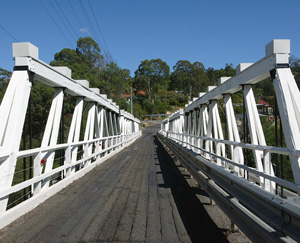 How did timber truss bridges become such distinctive elements of the landscapes of NSW? And why were more than 400 of these bridges built in the eighty years after responsible government was won in the 1850s?

Roads and Maritime has compiled a comprehensive book, the Timber Truss Bridge Book, which answers each of these questions and more.

The history of roads and maritime agencies in NSW

Managing heritage during infrastructure developments including Aboriginal sites and places.

Find out about our oral history program and listen to audio files for various programs.

Access some of the historically important still and moving images taken for road projects since the early 20th century.

Find out about our range of self-guided tour brochures.

A large amount of infrastructure that still meets its intended purpose, and which influenced the shape of settlement of New South Wales over more than two centuries represents designs and technology no longer in current use. This heritage in lines of road, bridges, milestones, wharves and navigation markers – reflect changing technology of transport and construction, economic cycles and social evolution. Some of this heritage is considered to be of state or national heritage significance. As well as its own heritage, the continuing development of the state’s road network and maritime zones has the potential to affect Aboriginal and non-Aboriginal heritage sites through road construction and widening or the replacement of existing infrastructure.

Roads and Maritime’s heritage role is to ensure that it minimises adverse impact to heritage places and values through early identification and assessment of potential heritage impacts, consultation with the community, stakeholders and regulators and making sure that heritage is considered throughout the planning, design and construction process. Find out more about heritage assets and movable heritage.