After more than 50 years of ongoing construction and the creation of an estimated 80,000 jobs in NSW, Roads and Maritime Services completed the duplication of the Hume Highway in 2013.

Linking the nation's two largest state capitals - Sydney and Melbourne - the Hume Highway is arguably Australia's most significant major highway. The opening of the Holbrook bypass in August 2013 completed the transformation from its dirt track origins into a modern, 4 lane dual carriageway highway.

Stretching a total distance of more than 800km, the completed highway provides a safer and more efficient trip for travellers and road freight between Sydney and Melbourne. The construction of 26 major bypasses in NSW has removed large trucks from local roads and towns, reducing noise and other traffic impacts on local communities.

Since 1974 the upgrade of the Hume Highway has been funded by the Federal Government. 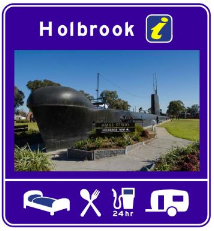 The bypassed towns signage trial aims to encourage travellers to stop and visit bypassed towns in regional and rural NSW. Holbrook, Macksville and Berry are part of the trial.

A short history of the Hume Highway provides a brief overview of the key milestones in the highway's history.

The Old Hume Highway: history begins with a road provides a self-guided tour of the highway, highlighting the historical significance of the towns, localities and features along its more than 500km length within NSW, from Ashfield to the Victorian border.

Our town now is an oral history telling the story of how 3 towns have changed since being bypassed, including Goulburn. It is based on original interviews with members of the local communities, and Roads and Maritime staff who were closely involved in the planning and construction of the bypasses.

Road safety on the Hume Highway has significantly improved since the duplication project started. As well as the improved road conditions, safer vehicles, compulsory seat belts and better policing tools such as radar guns and breath testing were introduced during the construction period.

This table provides a snap shot at the reduction of road related injuries and fatalities on the Hume Highway since 1976.