On 1 October 2014 the NSW Government celebrated the 50th anniversary of the opening of the Gladesville Bridge and the recognition of the bridge as an Engineering Heritage International Marker by Engineers Australia. The bridge was also added to the State Heritage Register.

When opened on 2 October 1964 it was, at 1000 feet (305 metres) the longest span concrete bridge in the world. It remained so until superseded in 1980 by the 416 metre span Krk Bridge in Croatia. It replaced a two-lane iron truss bridge built in 1881 which was the only road crossing of the river east of Parramatta until the Sydney Harbour Bridge opened in 1932.

It was a bold and ambitious project, built at a time of great growth and expansion in post-war Australia. Along with Tarban Creek Bridge and Fig Tree Bridge, it was originally planned by the Department of Main Roads (DMR) to form part of the North-Western Expressway, intended to serve the northern suburbs of Sydney and link with the Sydney-Newcastle Expressway at Wahroonga. Whilst the North-Western Expressway was later abandoned, the Gladesville Bridge remains as an engineering feat and a testament to the skill and commitment of all involved.

Gladesville's design features, innovative construction methods and the jacking process set new standards for bridge design and construction and its success promoted the growth in specialist bridge design consultancies in Australia. It marked the transition from steel bridge technology including the Sydney Harbour Bridge towards concrete design, and confirmed the arrival of pre-stressed concrete as a major bridge-building material in Australia. It was the first major concrete arch bridge in the world built using precast segments and was one of the first bridges designed with the aid of a computer.

Gladesville Bridge was designed by Tony Gee, a gifted young British engineer then working for G. Maunsell and Partners in London, and built by a partnership of United Kingdom firm Reed and Mallik and Australian firm Stuart Brothers. Many newly-arrived migrants were employed in its construction, as were several Aboriginal workers. Despite the modest safety standards of the time there were no deaths or serious injuries.

Two prominent artists were engaged to paint and sketch its construction and four documentary films were also made.

The Royal Australian Institute of Architects awarded the bridge a Civic Design Award in 1965. In recognition of the bridge’s technical, historic and social significance, an oral history was prepared in 2000 involving interviews with many of the people involved in the bridge’s planning, design, construction and opening.

In December 2015 the American Society of Civil Engineers recognised Gladesville Bridge as an International Historic Civil Engineering Landmark. Bridge designer Tony Gee was in attendance when the commemorative plaque was handed over at a ceremony at Parliament House in Sydney. Tony also visited the bridge with other eminent retired bridge engineers and a short film was made of this historic occasion: 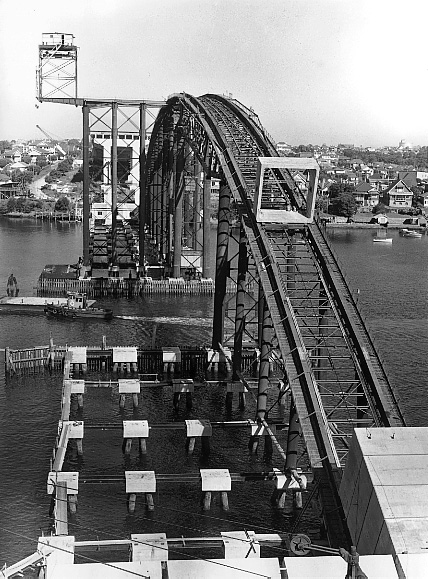 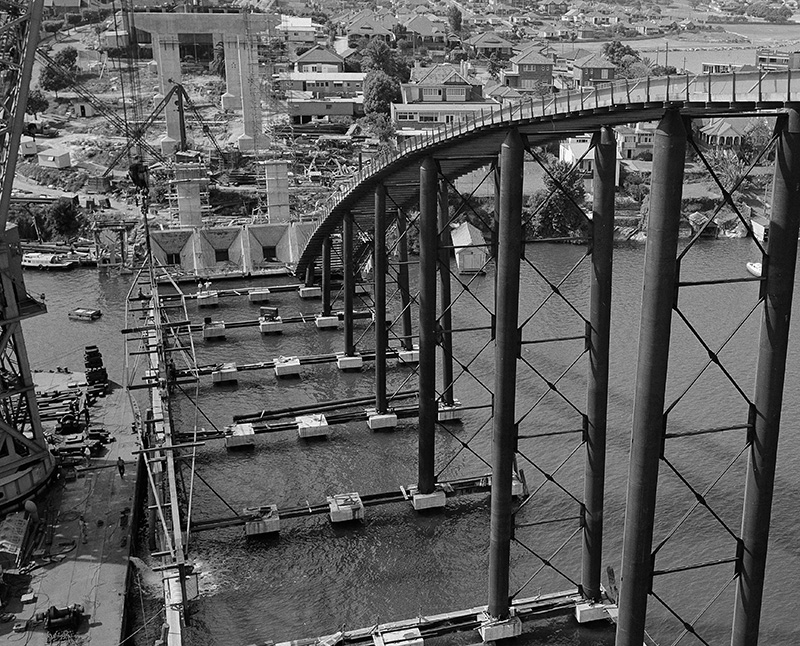 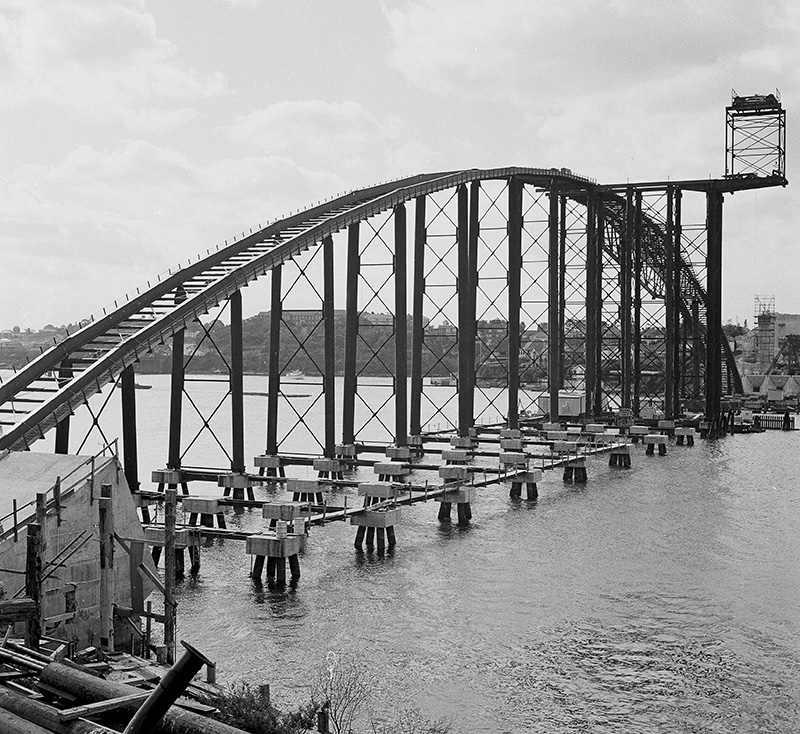 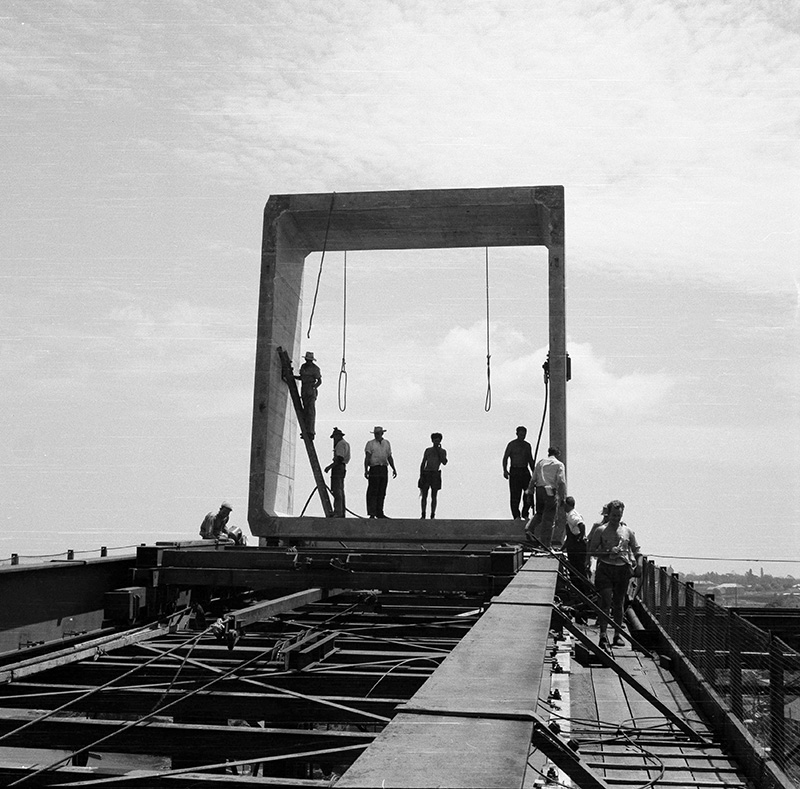 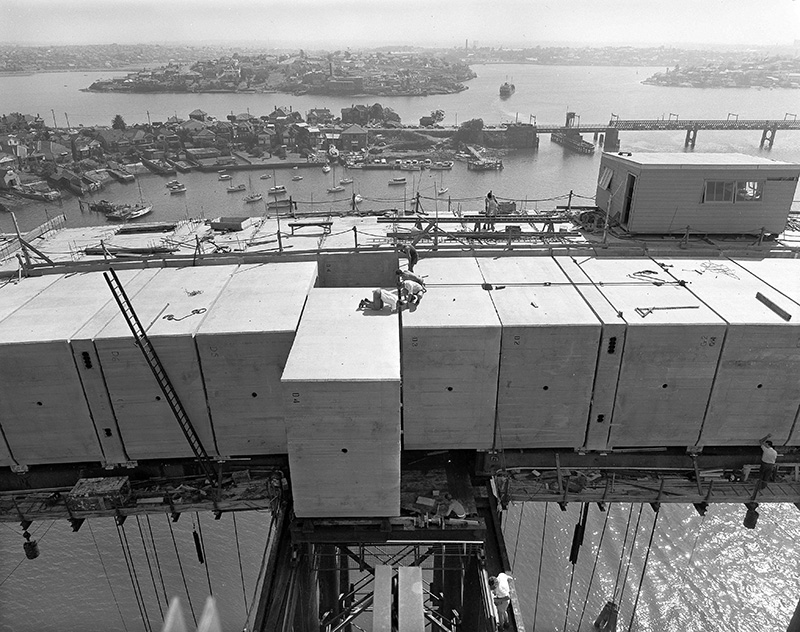 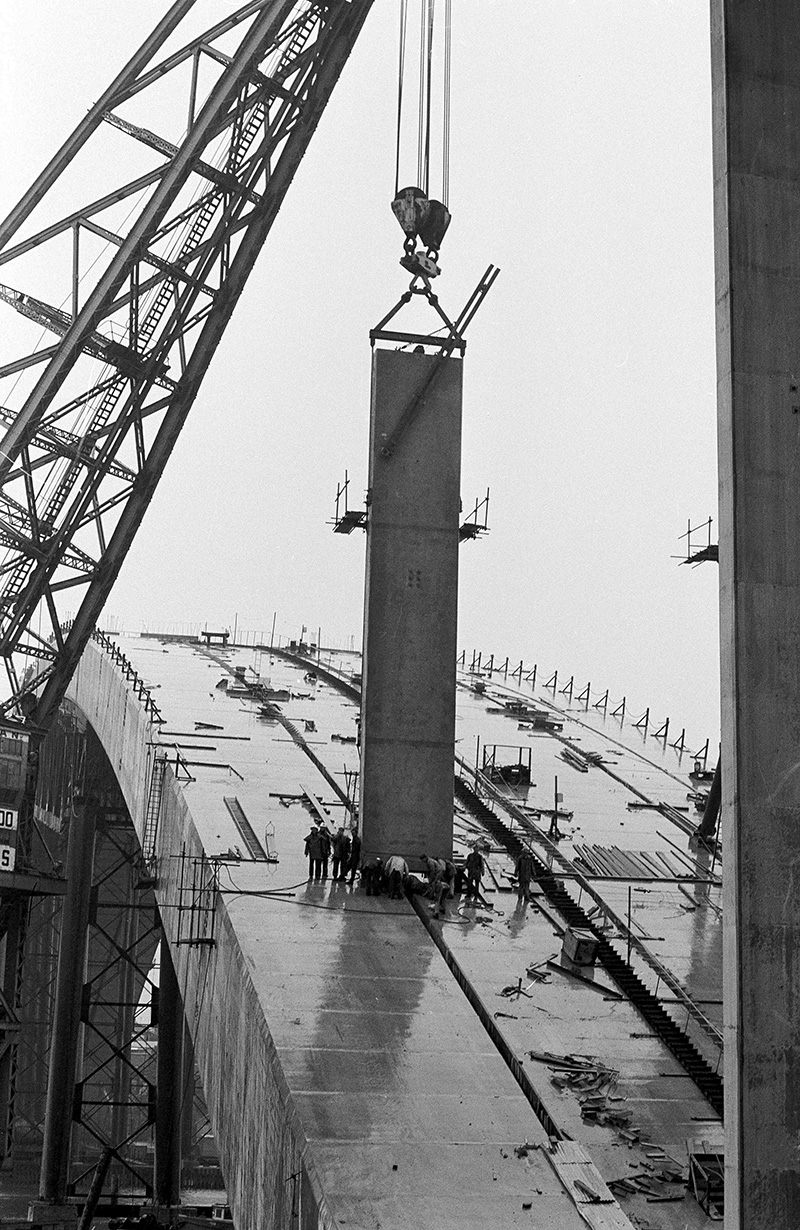 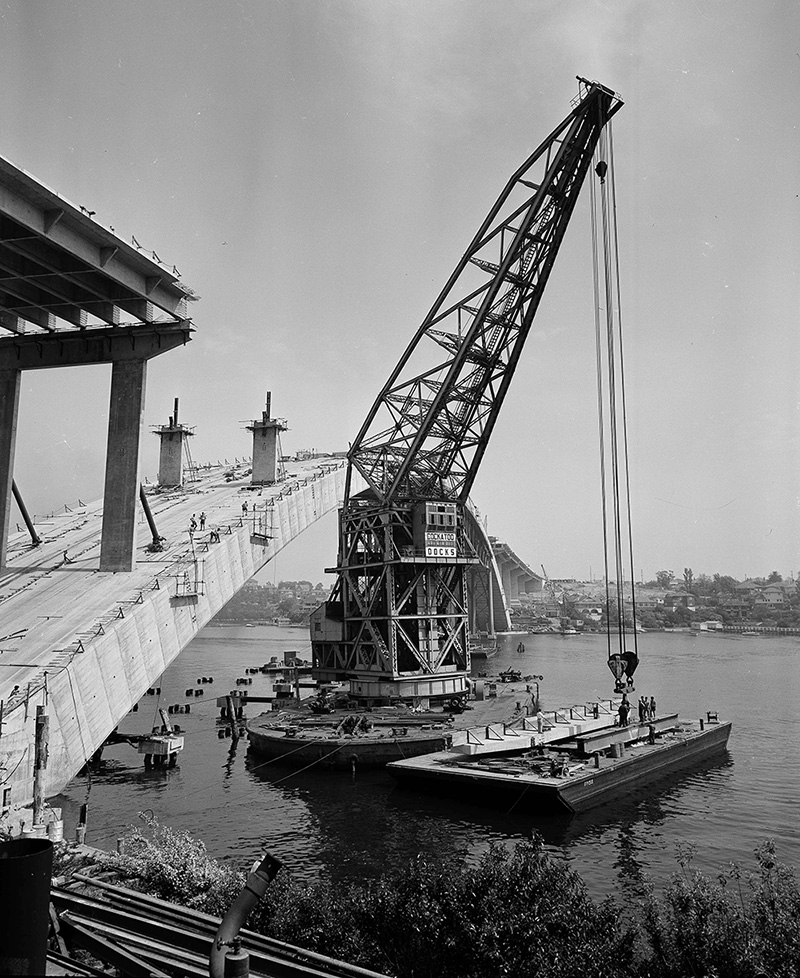 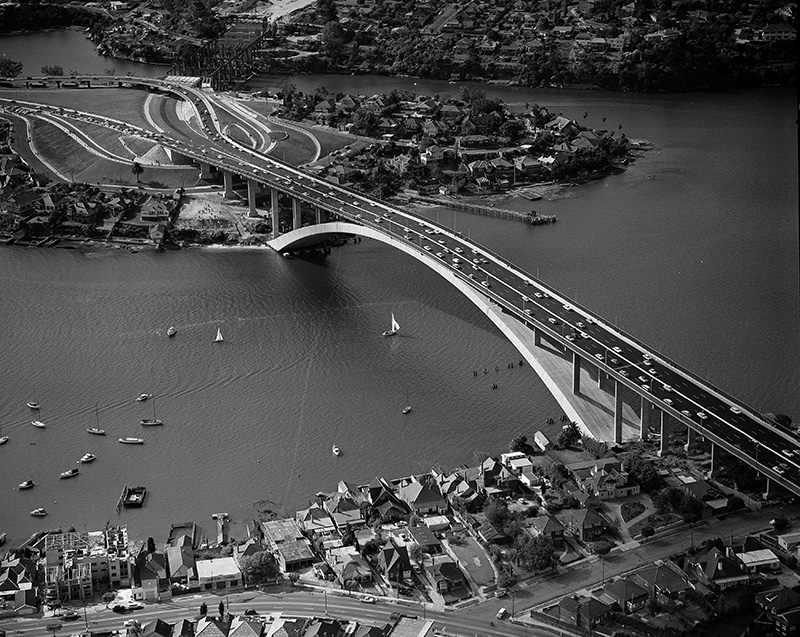 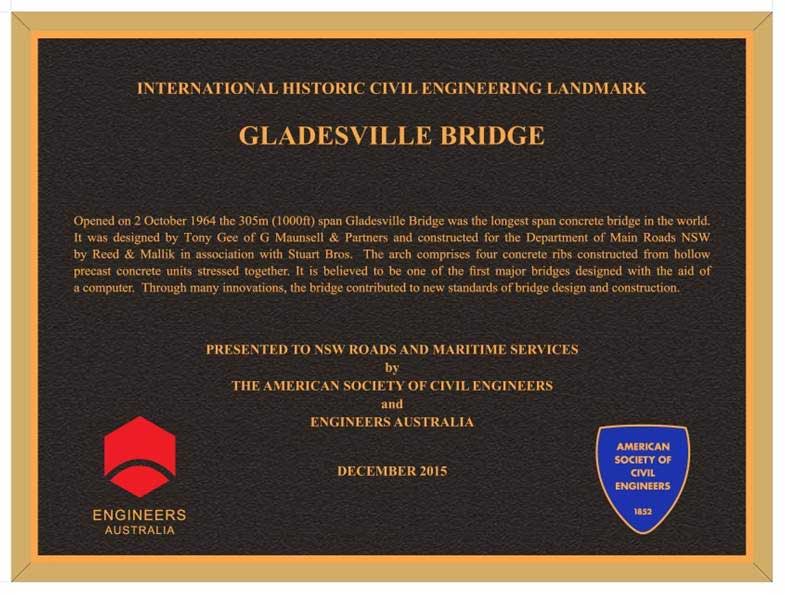 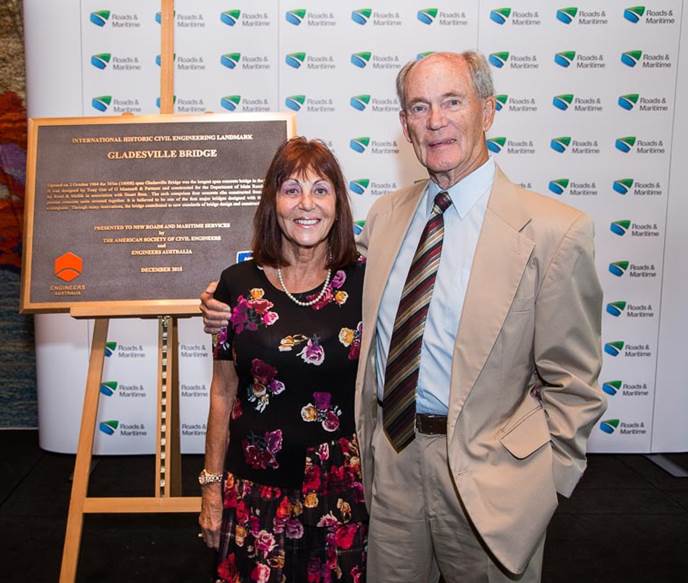 A view from the top of the arch back towards the shoreline during construciton.

The skeleton of the arch, viewed from the shore during construction.

Workers stand inside a precast concrete segment as it is fixed to the bridge.

Aerial view of the bridge shortly after construction was completed.

Commemorative plaque marking the recognition of the Gladesville Bridge as an International Historic Civil Engineering Landmark.

Designer of the Gladesville Bridge, Tony Gee, and his wife Patti Gee at a ceremony recognising the bridge as an International Historic Civil Engineering Landmark at Parliament House in Sydney.

This video is a collection of historic still images from the construction of Gladesville Bridge. 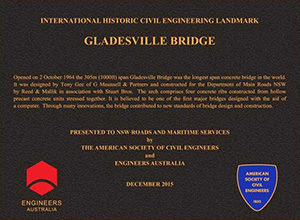